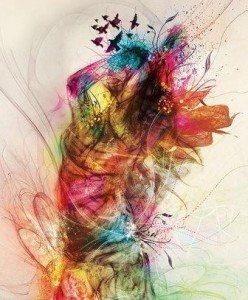 I’ll never forget sitting at Geneen Roth’s retreat, furiously scribbling notes about some strange, fascinating thing called “Internal Family Systems.” I was 19, the youngest person in the room by a long stretch. My parents had sent me to her week-long retreat because, though my weight had been “normal” for quite some time, my relationship with food was far from it. So there I sat, wide-eyed in a room full of strangers 2,000 miles from home, when I first learned about Internal Family Systems (IFS) and gained a whole new perspective on my relationship with my eating disorder.

On and off for years, binging had been wreaking havoc on my psyche. I was so ashamed about it, yet the thought of not doing it at all seemed unfathomable. After every binge, I would sit in a daze of self-loathing, meticulously planning how I would get back on track and “make up for everything” in the following days. I abhorred the part of me that binged. It felt like a monster that took control of my limbs and made me do things I’d hate myself for an hour later. Why couldn’t I just STOP?

As IFS would describe it, the part of me that binged was a “firefighter,” a part that swoops in and acts fast when it perceives an emotional threat and reacts quickly to “take control” of the situation, whatever the cost. Firefighters want to distract your attention from painful feelings, often through impulsive behaviors that aim to be a “quick fix.” After a binge, one of my “manager” parts would then take over: assessing the “damage” and making a plan to get everything back in order and appear “normal” externally.

What Geneen helped me understand about these manager and firefighter parts of myself was that, as misguided as their idea of “help” was, their ultimate goal was to keep me safe, protected, and functional. To keep me from getting rejected, criticized, or hurt by others, or to have to face the parts of myself that feel too weak, needy, or vulnerable to accept (these are called the “exiles”). In that light, it seemed almost cruel to hate those parts of myself. Sure, they weren’t going about things in the best way, but their aim was both honorable and understandable.

When I realized that I didn’t have to hate the part of me that binged — as much pain as it brought me — I could learn to relate to that part in a whole new way. If I felt the urge coming on, I could ask that part of me, “Hey, what’s going on? Do you feel unsafe? I appreciate that you’re trying to keep me from feeling pain, but I know I’m capable of surviving whatever it is I’m feeling, and I can get help if I need someone to walk with me through it. Does that sound okay?”

This is what IFS refers to as “Self-Leadership.” The model asserts that, in addition to these parts, everyone has a capital-S-Self at their core. When IFS founder Richard Shwartz began to observe common themes of Self-leadership in his clients, he identified what he calls the “8 C’s”: calmness, curiosity, clarity, compassion, confidence, creativity, courage, and connectedness. Healing, from this perspective, is not about “getting rid of” the other parts, but being able to differentiate the true Self from these other parts, unburden the exiles of their woundedness, and “unblend” the protective parts from the Self by approaching them from a place of compassion and understanding rather than judgment and disgust. This is where Self-leadership is born.

IFS therapist Mary Kruger states, “After asking what brought a client to treatment, I ask what their part that wants to drink/starve/binge, etc., says about being here. Recognition of the firefighter’s existence, and the invitation for it to speak, is both a profound and a beautiful moment. It is also the first step in befriending that part.” And befriending doesn’t mean colluding with that part or agreeing with its methods. It’s about that understanding and compassion. So next time you have an eating disorder urge, see if you can have a dialogue with that part (perhaps written in your journal), approaching it with non-judgmental curiosity. You may be surprised about what you learn, and you’ll be taking an important step toward self-compassion and Self-leadership.

How do you relate to your eating disorder? Underneath its more surface-level motivations, what do you think that part of you really wants for you?