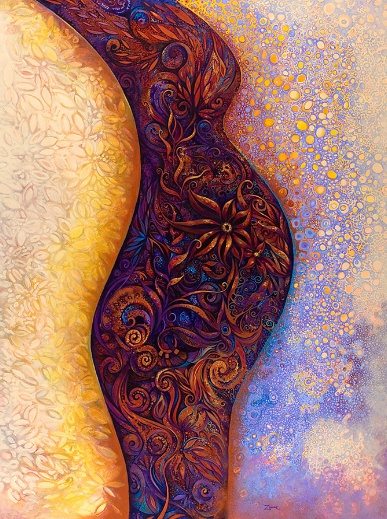 One of the treatment goals in providing prenatal group psychotherapy for women with eating disorders is meeting each woman in the moment each week. The process of group therapy can vary, however, this group format addresses the underlying hunger associated with eating disorders. When a woman becomes pregnant and has or currently struggles with an eating disorder, in some ways it colors her experience of becoming physically pregnant as well as informing her psychological processes of becoming pregnant. No two women are the same and this group is designed to specialize in specializing in the needs for the women in the group. With that being said, one theme that links each woman in the group besides being pregnant is the experience of an eating disorder and associated mood disorders.
As the group therapist, my job is to attune to each woman’s potentiality of depressed mood and body dissatisfaction and provide a framework for therapeutic intervention. I rely heavily on attachment theory and psychodynamic insights to inform my work.

When we ask what the body is, attachment theory can help us understand how internalized attachments can find a voice in the body. Attachment theory can help us to understand how unspoken narratives can take the form of psychosomatic processes or illnesses. This is especially true for people who react to psychological stress through somatic manifestations and pregnancy can have an effect on this process. As the mothers in my group begin to think about their attachment to their baby they have only to call upon their own blueprint of attachment with their mothers and primary caregivers. This is because one’s own attachment process becomes deeply internalized and is a major factor in the development of eating disorders.

Sylvia expressed loving being pregnant and loving her body more than she ever had despite her gestational diabetes and the self-control she had to exercise in order to provide a safe in utero environment for her baby. She stated that when she looked in the mirror she liked her image and hadn’t felt that way in a long time. When she projected to giving birth and going into labor, Sylvia talked in the group about her resistance to giving birth. She did not want to not be pregnant. She wanted to keep her baby inside of her, perhaps to feel full and alive.

When Jennifer joined the group she was 7 months pregnant. She has been in treatment for an eating disorder for many years, on and off, and has recently moved to a new community. She stated that she is very dissatisfied with the changes her body has made in adapting to being pregnant and that she feels very out of control. She has contained her urges to act out any eating disorder symptoms such as restricting or purging even though the thought has occurred to her. Her intention is to keep her baby safe. Every week Jennifer has clearly expressed her desire to not be pregnant anymore. She wants to be back in her old life and able to exercise control over her body.

The power of prenatal group therapy for women with eating disorders demystifies destructive behaviors and decreases shamefulness and allows patients to appreciate the adaptive aspects of their eating disorders, mood concerns, and traumatic attachment issues.

Working through the enactments in a group setting and understanding them enables both the group members and the therapist to know through experience that each can feel whatever they may feel with the other without destruction of the relationships and abandonment. Even intense emotion can be contained. The group is both supportive and mutative. Both Sylvia and Jennifer had the opportunity to speak openly, honestly and clearly about their physical experiences and the feelings associated with their changing bodies. This enabled them to move through the dissatisfaction without having to take action on their feelings. By talking and thinking, each woman in the group has the opportunity to develop insight and learn something new about oneself and each other. Through the support of the group process, the reflective function of the therapist and the group members, Jennifer and Sylvia were acknowledged for being exactly where they were at with no expectation of being anywhere else or feeling anything different.

This type of process ignites emotional regulation. Emotional regulation is an important aspect of psychological development and attachment processes. Since the women in this group are pregnant and forming attachments with their unborn babies already, being able to effectively emotionally regulate is imperative. It allows for a sense of control that has been difficult in the past to accomplish and what their eating disorders have most likely helped them do. By replacing their eating disorders with group therapy and emotional regulation skills, each woman in the group has the opportunity to create more attuned relationships with their babies and sustain their own psychological growth.

All names and identifying information have been changed to protect patient confidentiality.