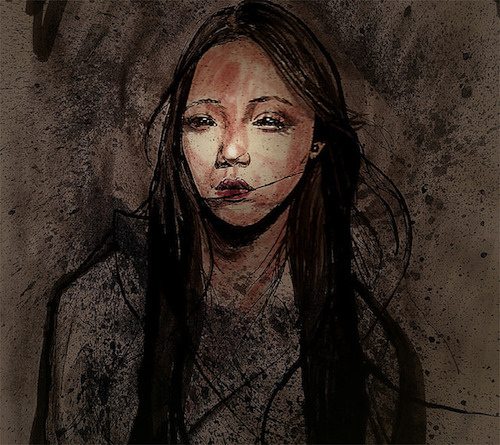 What’s it like to have an eating disorder? It’s difficult to explain, but I’m going to try regarding at least one aspect of it. This may start off a bit strange, but it’ll get there…

A few months ago, I opened the front door and as usual, proceeded outside and towards my car. I remembered my dry cleaning that I’d forgotten. However, while I was inside, a significant web barrier had been built across the pathway. I didn’t notice it or the huge — I mean HUGE — spider in the middle until my nose almost hit the belly of the spider-beast. It was about two inches from my face —ALMOST TOUCHING ME! NOOOOOOOOOOO! I have a very strong response to the presence of a spider, let alone one that’s about to be ON MY FACE, so I did what any normal person who is scared of spiders might do:

I began screaming and running back through the house with my knees high in the air. (Yes, I learned that I do this knee-up-run-for-your-life response one day on a hike when my foot almost stepped on a rock that suddenly moved, AKA a tarantula.) I couldn’t stop running — like a flamingo.

Apparently, in a moment like this, I sincerely believe that if my feet touch the floor as little as possible, it will prevent a spider from crawling up my leg. Yes, I recognize — when not in the panic moment — that this is a significantly irrational response.

However, even the most rational person can become incomprehensible to self and others when fear is present.

I ask you the following. What are you terrified of, scared of, or very uncomfortable around? Public speaking? Spiders? Poisonous snakes? Your in-laws? Please search and find something for you that matches.

Got one? Then please proceed to the next paragraph.

For someone with an eating disorder, having to eat a meal or snack might feel how confronting your terror/fear/uncomfortable thing a minimum of 3-6 times a day, would feel for you. You might think that desensitization (more or less a progression of getting used to the fear and it affecting someone less) might naturally happen with those repeated exposures. But no, it generally does not on its own without dedicated work for someone with an eating disorder. At the end of even one day of greeting your terror/scared/uncomfortable thing at least 3-6 times — then add additional things such as social events, office meetings, etc. — how might you feel?

Let’s keep going; add this. In the last 2-days, have you been anywhere where food was not available, accessible or close by? Food seems to be just about everywhere nowadays, even in places not traditionally dedicated to food! For example, when one pays at a gas station, home supplies, or office goods store, there tend to be snack foods available at the cash register area. For someone with an eating disorder (whether that person has issues with over- or under-eating), that might feel how, for me, reaching through a spider web with a live monster in the middle would feel. EACH TIME! Now imagine your own 2-days of these repeated exposures to your terror/fear/uncomfortable thing multiplied by every day for how ever many months or years your loved one has been affected by the eating disorder. Each interaction with fear can be as powerful as the last.

I’m not saying this is all of what an eating disorder can feel like as each is uniquely experienced. But this comparison might be a start of helping someone understand or empathize with what someone afflicted might be experiencing. And yes, there can also be feelings that look like obsessions with food (touching, hoarding, recipe surfing, cooking for others, etc.) vacillating or coinciding along with fear of food. (That’s worth a different article!) Right now, let’s focus on what can appear to an onlooker or supporter to be irrational or attention-seeking. The fear can be SO REAL to the person struggling.

What I hope you will remember from this article is: How would you feel both mentally and physically if you had to face your fear as many times a day as food is available, purchasable or needed to fuel your body?

NOTE: Carolyn Costin has likened eating disorders to phobias and thus deserves credit for the original concept behind this article.