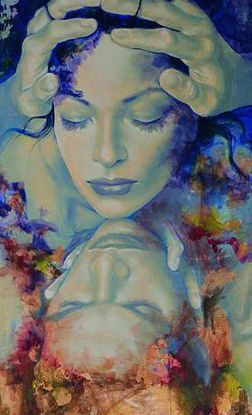 Iremember speaking with a group of patients about our body checking rituals. We all know what they are. Hands around the wrist. Squeezing the flesh (not fat!) on our thighs. Measuring the waist. I mentioned how I used to find it a comfort to hold my hip bone in bed.  ‘Rather share your bed with a bone than a bloke.’, another patient said, flippantly. But I was struck.

It’s so true. Eating disorders have such a fundamental impact upon relationships. It is often a destructive, negative, limiting and brutal impact, and as relationships and connection are what makes life so worth living, it’s heartbreaking.

Relationships require energy and attention. Not only are energy levels often quite low, particularly for those with restrictive disorders, but all the energy is directed on food, weight and exercise. The mental space which can be used to build connection with others is taken up by thoughts of the eating disorder. A study looking at the treatment of those with severe and enduring eating disorders reports statistics on the subject population that are revealing, and very sad. In this study the average participant was 33 years old and had been ill for over 16 years. Roughly 60% had never married, 28% had children, 61% were unemployed and 51% reported no social relationship.

Eating disorders trigger and are predicated by a tendency for self-loathing and shame. Individuals know that their bodies may not be pleasing to others, or that their habits are not what would be considered normal, and so often put others at arm’s length to resist that judgement that may come. Dissatisfaction with the self may lead individuals to believe that they can not be loved anyway, and so not risk the vulnerability that comes with opening up to another person.

Isolation and separation are both a root and result of eating disorders, as individuals compensate for their loneliness by retreating further into the disorder, and perpetuating it.

Existing relationships will change. Friendships will alter as personality and vivacity start to wither as weight does. Quite apart from the number of social occasions which revolve around food – and no one likes to dine with someone pushing a salad around – people want friends who can engage and interact, rather than those who are obsessive, irritable and lost in their own worlds of the disorder. Judgments will be made about your capability based upon your weight, which causes difficulties at work and opportunities available as a result. It’s not just that friends and colleagues will not be having such an enjoyable time as before, as most people are not so focused on themselves and will try to help and reach out.

But in the throes of an eating disorder encouragement to cease exercising or eat more healthily can be the last thing that we want. Support feels like a challenge to the eating disorder, and so we stop forming relationships and push those we already have relationships with away. Human beings naturally do not want to be rejected, and so the healthy person who has had their support and help rejected time and time again may feel responsible, helpless, that their help is futile, and so give up.

A relationship once based on mutual support can shift to that of a carer-patient role, upsetting the balance of adult relationships, and resulting in unhealthy and stressful attachment.

It’s impossible to control how another person behaves or thinks, and for an illness that is so tied up with control this can be difficult. It’s particularly problematic when it comes to the uninhibited freedom of sex.

Ah, sex. Why is this such a taboo in eating disorder recovery. Literally, the bones become who we want to share a bed with. Many people with eating disorders struggle with sexual intimacy and a reduction in libido. There could be many reasons for this, but two stand out. There’s the emotion of body image, and how individuals who are so aware of their figures may feel about someone else seeing them. With such a distorted sense of one’s own body, it can be very difficult to consider that someone else may find it attractive. (Or just as complex and traumatic can be when someone finds an underweight body attractive, they know they  must gain weight, but are responding to these positive comments with disordered thoughts.) But there’s also very clear physiological reasons.

A starved body starts to switch off the non-essential functions – like the ability to have children, focusing the limited energy resources on heart and brain function.

If the body is barely able to look after itself, it cannot support the growth of another being. One of the key signs of anorexia nervosa in particular, is amenorrhea. The hormones which allow menstruation, particularly estrogen, need fat cells in order to be produced. When the levels of fat in the body fall below the levels needed for women, (21-33% for females aged 20-39 ) the fertility hormones are no longer produced, and as a result the desire for sex also falls. As far as the body can see, if you can’t have children, why do you need to have sex. Sexual satisfaction studies have shown that sexual satisfaction is inversely related to degree of caloric restriction and that the greater the weight loss, the greater the loss of sexual enjoyment. The good news is that increases in sexual drive accompany weight restoration.

It all comes down to priorities. Even if the person with an eating disorder does not explicitly acknowledge that their illness is the most important relationship in their lives, the fact that 90% of their thoughts, feelings and energy goes on it as pretty good indicator of the fact. There’s no room to find connection elsewhere. No space for intimacy. No opportunity to build meaningful relationships.

Which relationships in your life are important? Is the eating disorder the only connection you want? How would recovery improve your relationships? Leave your comments in the comment section below.