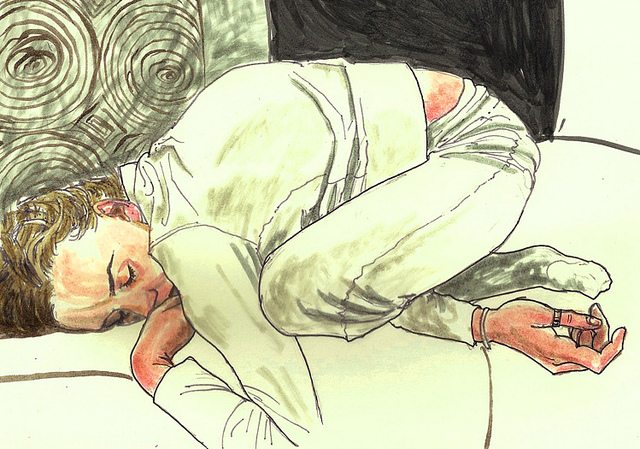 The physical, sexual and verbal abuse in my childhood had a direct effect on my self-esteem and self-image. As a result of the abuse and other factors, I developed an eating disorder at the age of eight which lasted for over seventeen years. Later, my mental health issues expanded into substance and alcohol abuse, sex addictions, body dysmorphic disorder, suicide attempts, compulsive spending, and depression.

I thought that my so-called “glamorous” career as a fashion model would fix my sadness and bury my pain, but nothing could. If anything, it only made it worse because I was not dealing with the mess, merely painting over it and positioned in an industry that oftentimes mirrored the psychologically damaging situations of my past.

The root of my problems had to be traced to the initial trauma — the abuse. I felt a tremendous amount of shame in even recognizing what had happened to me as a child. It took a great amount of courage to admit that I had struggled with eating disorders for most of my life, but to come to terms with sexual abuse…that was an entirely different story.

For anyone who has been abused, recognizing it is a necessary but painful, brave first step. How do you even remember something that oftentimes has been repressed and viewed by most as shameful and something that should be “swept under the rug?” Sexual abuse, and really abuse in general, is an issue that keeps sufferers in the bondage of silence due to the lack of support and education currently available. According to the Peaceful Hearts Foundation, it affects more than 42,000,000 people in America alone, with one in six boys and one in four girls suffering before the age of eighteen. Yet how many come forward and receive adequate help? I know I felt as though I had no one to turn to, and instead internalized my pain and began to overeat, then later binged and starved as ways to cope with the trauma. Let’s not forget about the years and years of

I know I felt as though I had no one to turn to, and instead internalized my pain and began to overeat, then later binged and starved as ways to cope with the trauma. Let’s not forget about the years and years of sexual issues that afflict those of us as well. In my mid teens and on into my late twenties, I struggled immensely with periods of promiscuity, then went through times where I disassociated from my body and despised myself and anyone that I was in a relationship with. It was extremely difficult for me to just feel happy when I was with anyone else because frankly, I wasn’t happy with myself. Escaping seemed to be the only suitable option, whether that was through avoidance, controlling my partners or through engaging in disordered eating behaviors.

Thankfully, there are answers for those who have endured child sexual abuse as well as eating disorders. Along with various therapies such as trauma-focused cognitive behavioral therapy, child-centered therapy and group therapy (1), the National Eating Disorders Association also has tremendous resources available for anyone seeking information, and ways to find help in their area. They have a click-to-chat where users can anonymously chat with someone or call their helpline at 1.800.931.2237. Here are some of the organizations dedicated to assisting families and individuals of child sexual abuse.