The Case Against Fitbit: Five Reasons to Ditch the Counters and Apps 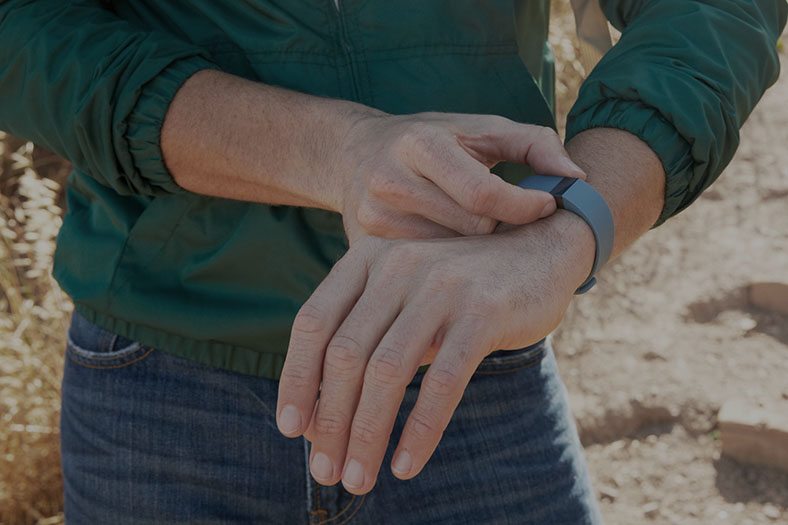 You are getting ready for bed. After brushing your teeth and hopping into comfy pajamas, you suddenly remember that you haven’t checked your steps yet tonight. You glance down at your Fitbit – 9,500 steps.

I didn’t reach ten thousand yet? What have I been doing all day? Laying around?

Your inner critic instantly begins to chastise you. “Lazy, worthless, slob.” The guilt is like a wave. It begins slowly but gains momentum quickly.

Shame-ridden and semi-panicked, you jump up and begin pacing the room. 9,505, 9,5010, you watch the steps tick upwards as you frantically walk back and forth. Mid panicked step, the thought occurs: “What am I even doing?”

Whether you have a Fitbit or not, if you have ever struggled with body image issues or a disordered relationship with food or exercise, you can probably empathize with this mentality. The feelings of panic, the pointless number crunching, the emotional weight put on a nonsensical goal (where do they even get 10,000 steps? Says who?). Fitbits and similar weight/steps/calorie trackers take away from the innate quality of life. Which is exactly why I believe that we need to toss the Fitbits and start living our lives.

Here are five reasons to ditch the Fitbit:

I say this in a two-fold way- Firstly, the number of steps truly doesn’t matter-Because we are more than numbers. Recovery from a disordered relationship with food or exercise hinges on the idea that we are more than our weight or calories consumed.

2. Fitbits do not foster a trusting relationship with our bodies

Ditto for food tracking apps. Anything that tracks your exercise or eating in terms of numbers is going to hinder the possibility of a mind-body connection. We stop listening to our bodies and start listening to a piece of technology instead.

For example, say I was trying to move towards intuitive exercise and had already taken a walk that day. I notice at night that I had not walked 10,000 steps at the end of the day. I am tired (I worked all day), and my body wants sleep. Yet, I get up and start pacing anyway. In doing so, I have just over-ridden my body’s cues in favor of an external source.

Say I was was tracking my caloric intake/food groups on MyFitnessPal. I ate an early dinner. But later my stomach is growling. My body is clearly trying to tell me something! But I glance down at my app and see that I have met my “caloric limit” for the day. So I decide to go to bed hungry, and subsequently squash my internal hunger and satiety cues for the evening.

Both of these are instances of overriding one’s natural body cues, and instead listening to some outside, completely arbitrary source.

“Big deal,” you might be thinking. “So I don’t listen to my stomach or push through fatigue one time. So what?”

Well, the problem is, repeated instances of ignoring your body’s signals can, over time, impact our ability to even recognize hunger, satiety, fatigue, or true energy.

In accumulation, these actions compound to create a complete reliance on your tracker or counter. And this can be quite problematic. What if the tracker breaks? Or your phone doesn’t work? How will that feel mentally and emotionally? Once one starts to rely on a piece of technology for body cues, our freedom becomes quite limited.

For those of us with vulnerabilities to disordered relationships with food or exercise, tracking and logging can be a slippery slope. A focus on numbers can quickly turn into an obsession with numbers.

An obsession with numbers can quickly turn into an obsession with weight (or rather, weight reduction). This change can happen insidiously, and then all at once. For someone in recovery, a keen awareness of triggers and slippery slopes is key. Many triggers are hard to evade completely. Luckily, these apps and devices are one trigger that can be avoided.

Fitbit allows users to share information (including average daily step count and “badges,”) with other Fitbit users. The point is to foster “healthy competition”.

Other apps and devices (for example RunKeeper) allows users to post stats directly to social media. I suppose the point there is that sharing your accomplishments with others can foster a sense of pride. The problem here is that, for those with a vulnerability towards disordered eating or those in recovery, this sort of competition is rarely healthy.

In fact, one’s “eating disorder voice” can often propagate the idea that the whole world is a competition.  Hence these apps and devices can collude with one’s ED voice to make that idea seem more rational.

Hey, the Fitbit community competes to see who can get the most steps in, so it must not be unhealthy to be pacing around my room at night. I’m just trying to be the best!

Even for those who don’t struggle with a disordered relationship with food or exercise, competition can still encourage an unhealthy attitude towards movement. That is, an attitude that encourages one to constantly “up their game,” at the expense of bodily or mental limits.

5. There is research that proves that these devices can negatively impact mental health

Psychologists have been questioning the impact that Fitbits and similar devices may have on mental health for some time. So, it was only a matter of time before a researcher took the issue head on.

Simpson and Mazzeo recruited 493 undergraduate students to answer questions about their Fitbit/pedometer, and MyFitnessPal usage. Students were also asked to take the Eating Disorder Examination-Questionnaire (EDE-Q).

It was found that students who reported using calorie trackers had higher levels of eating concern and dietary restraint. Additionally, and alarmingly, it was found that fitness tracking was uniquely associated with eating disorder symptomatology.

So there you have it

There is mounting evidence that Fitbits and related apps can be very harmful to emotional well-being and mental health. You deserve so much more than a life of counting numbers to create a false sense of control.

You are worth more than the fleeting feeling of happiness that occurs when you post arbitrary stats. You are worth the pursuit of lasting, true contentment, and an overall sense of self-love.

So let’s ditch the counting and start living, warriors.