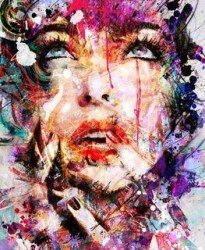 It’s not uncommon for people aiming to recover from an eating disorder to seek what they see as the ‘best of both worlds.’ To have challenged some of the behaviors and progressed from a dangerous zone where life is compromised, but still be thin. They may manage to hold down a job and some semblance of a social life. It seems an enviable place to be, especially in a culture craving thinness, this place of partial recovery.

But this is delusion.

Your mind is still battled by eating disorder thoughts, your body is still physically suffering, and many of the symptoms of your illness remain. But the chances are that at a higher weight less support will be given. (I am primarily discussing anorexia here, and I’m aware that with other eating disorders weight gain or loss may not be a good indicator of an eating disorder. Eating disorders, or disordered eating, exist at  all weights and shapes.)

Living in partial recovery is actually the worst of both worlds.

So is partial recovery good enough?

The rate of recovery is estimated to be around a third. But what recovery is remains unclear. Some people believe that you can never fully recover from an eating disorder, and that the best that can be hoped for is ‘management’ of it. Whilst it is true that no wonder cure exists, the idea of settling for management is one that encourages partial recovery and that’s a dangerous place to be. Recovery is not something easily defined. Everyone – sufferers and experts – have different opinions. The blog Your Eatopia suggests three facets that can be used to measure recovery.

Recovery requires a healthy body weight, internal damage being fixed, and more normal behaviors around food and psychological responses to difficult situations. Weight restoration comes first – both in importance and time. The second two will not happen without weight restoration.

Don’t stop at partial recovery. Make solid and lasting progress on your recovery inside the Courage Club. Join now!

How is recovery defined?

Emily T. Troscianko, Ph.D., a Knowledge Exchange Fellow at the University of Oxford, has written extensively about her experience of and recovery from anorexia. Her blog A Hunger Artist is an inspiring and fascinating source of personal understanding and scientific research. She takes issue with the idea that recovery is not possible. “There’s no clear evidence for irreversible neurological or cognitive damage post-recovery” and she believes very much that reaching a minimum BMI acceptable for leaving treatment is not a sign of recovery.

She encourages people to ‘overshoot’ before settling on a weight range that works for them. Very few people’s set point is exactly at a BMI 18.5, or 20, and constantly measuring your intake and living a life defined by a number is still disordered behavior. Regardless of whether that number is considered an underweight one. As she says ‘Dieting is incompatible with recovery from anorexia, both physically and psychologically.’ Gaining weight is challenging, but it is necessary for the brain and body to begin to function once again. If recovery comes with a fully working body, then the fuel needs to be there for it.

I remember reading about one woman who considered herself recovered. She carried cottage cheese in her handbag for times when she needed a meal but ‘could not’ have what was on offer. This is not ‘normal’ behavior for the majority of the population. Actually it is out of the ordinary, disordered.

If your life is still ruled by diets and weights and anxiety and fear around food, you’re not recovered.

Even if your trousers fit. Even if a BMI of ‘non anorexic’ has been reached. Because these are all indications that your body and mind are still malnourished. And as Emily says, the fact that the idea of gaining more weight scares you is definitely a sign that it needs to happen for your brain to start to work again.

One medical study found that over a six year period discharge from hospital was occurring at a lower exit BMI which was leading to a higher readmission rate. Basically, the lower the BMI when exiting support, the greater the chance of relapse and severe enough relapse to require hospitalization. This demonstrates how reaching this middle ground is not really recovery. As there is always such a high chance of slipping back again.

Each relapse becomes more difficult to fight back from. The longer the eating disorder remains in place, the more impact it has. The body adapts to being malnourished and ceases body functions that are not “vital” causing amenorrhea, osteoporosis, organ deficiency, and endocrine imbalance. Relationships break down, social engagements are difficult, holding down a job or going to school becomes harder and mood is impaired. All this makes life seem tough – and the eating disorder more attractive.

The longer an eating disorder goes on the more entrenched it becomes, and staying in a semi-recovered state is only perpetuating that process of entrenchment.

For people who fall into the category of having a Severe and Enduring Eating Disorder (generally defined as over five years and aged over 26) chances of recovery are lowered. New guidelines suggest that the focus should be on quality of life and social integration rather than weight restoration and regaining a healthy body.

The eating disorder will always be present if it is allowed to be. And it will sneak back if the door is left ajar for it, because that is what partial recovery is. It’s better than dying, sure, but it’s never committing. It’s never letting yourself be free of the illness. It’s trying to reach the wall on one side of the room without letting go of the other.

If your quality of life is impaired because of the presence of eating disorder behaviors in your life, you are not recovered.

Partial recovery is stopping just before the finish line. Imagine what lies beyond it.

It’s hard. Really bloody hard, but that doesn’t mean there is no hope. It just means you have to keep pushing forward.

Don’t just settle. Live the life you are capable of.